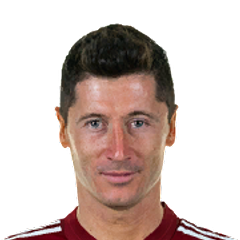 Robert Lewandowski is a 33-year old Polish professional footballer who plays as a Center Forward (CF) for the FC Bayern München in the German 1. Bundesliga. His contract salary with his current team is amounting to €60,000,000 and is valid until June 30, 2023.

Robert Lewandowski's eFootball 2023 Rating is 93 with a Max Overall Rating of 99 based on Max Level of 20. His notable skills include: